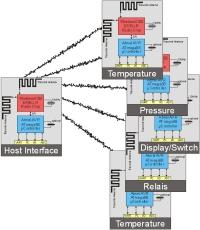 In combination with the iDwaRF-328 programmable radio module or the iDwaRF-Box, an easy-to-use wireless application plattform is available. The user can concentrate on the actual application development without the need to immerse oneself in wireless protocol implementation details or to acquire fundamental HF design skills.

The iDwaRF-Net firmware is based on Cypress' WirelessUSB N:1 DVK (CY3635) software and was ported from Cypress' PSoC architecture to the Atmel AVR microcontrollers.

The iDwaRF Hub forms the center of a star network that can contain a multitude of Sensors and Actuators. To facilitate the usage of extremely power-sensitive Sensors, the Hub is typically supposed to be powered by a constant external power supply. The iDwaRF Hub can interface to a local host (e.g. PC or higher level microcontroller) using a standard serial port (UART). A simple plain text (ASCII) serial protocol is used for the communication between the host and the Hub. For simple applications, the Hub might not require any host connection - the entire host application could be implemented in the iDwaRF Hub. For these purposes, the iDwaRF-Net firmware provides easy-to-use high level C-API functions.

Many iDwaRF Sensors can bind to a single iDwaRF Hub and form the N:1 wireless network. The iDwaRF-Net protocol is optimized for low-power Sensors, which predominantly stay in a power-down state and temporarily wake-up at a programmable time interval and exchange data with the hub if required. The iDwaRF Sensor can be adapted to own sensors and actuators and own tasks can be implemented by using convenient high level C-API functions.

The iDwaRF-Net protocol utilizes the unlicensed 2.4 GHz Industrial, Scientific and Medical (ISM) frequency band for wireless connectivity. The band is split into 79 distinct 1 MHz channels starting at 2.402 GHz. Each iDwaRF network uses a channel subset spread across the 2.4 GHz band such that either the probability for interference with other iDwaRF networks is minimized and the number of channels each Sensor must search to find the current channel used by the Hub. Robust DSSS communication with Pseudo Noise codes (PN codes) with minimal cross-correlation properties is less susceptible to interference caused by overlapping transmissions on the same channel. The number of frequency / code pairs is large enough for hundreds of iDwaRF modules in the same space.

For a detailed description of the iDwaRF-Net Firmware see User Manual.

We ship world wide with German Post and DHL.